I remember playing with He-Man figurines when I was a kid, loved them then and love them now. From the first time Mattel's Masters of the Universe (MOTU for sort) action figure toy line hit the shelves in 1982, I and many other children wanted them. Desirable right from the start and with the He-Man and the Masters of the Universe cartoon made by Filmation, this muscle-bound toy line quickly became the must have plaything for young boys in the early ’80s.

36 years later, a cult following continues with a new relaunch of the toy line. Vintage MOTU figurines have since become highly desired collectibles for nostalgic adult fans. The toys that we played with can command prices ranging from $10 to $35 dollars or more a-piece. The larger items or accessories like playsets command a bit more. And the ones that are untouched by human hands still factory sealed in their original packaging sell for upwards of hundreds, even thousands of dollars.

As a collector and seller of theirs wonderful toys there are meany websites in which you can purchase them from. And if you're a collector and don't know where to start, I have listed below some of the best to get you started.

As for loud's of interesting news and information you can't go past theirs great websites:

I also just slipped in this little fun site:

Well we are almost done. As a seller of theirs figurines you can find some of them for sale on this website from time to time and in which I supply you with the links and information on this blog. Here are the few I have at the moment if you wish to purchase any and also sell them on eBay and Etsy.

MATTEL, ZODAC is a character from the popular 1980s toy line and cartoon series He-Man and the Masters of the Universe. Zodac was introduced in the first wave of figures Mattel produced and was released in the second half of 1982 and was billed on his blister pack as the "cosmic enforcer." Zodac's purpose was a bit of a puzzle, but he had an interesting look and he's now something of a cult favourite among collectors today.

Zodac is an enigmatic cosmic enforcer and in general portrayed being neutral in the battle between good and evil. However, unfortunately the difficulty in presenting this in a children's toy line has led to inconsistencies in this character.

Zodac was one of the first characters to be conceived by Mattel in the development of the Masters of the Universe toy line in 1981. Zodac action figure is tagged as "Evil Cosmic Enforcer", but despite being human he is given claw-like feet, a standard trait of the line's evil characters. This highly collectible figurine is in good vintage condition, loose and is not complete missing weapon, but is a great entry level as one of the favourites for collectors this is a must have to start collecting. 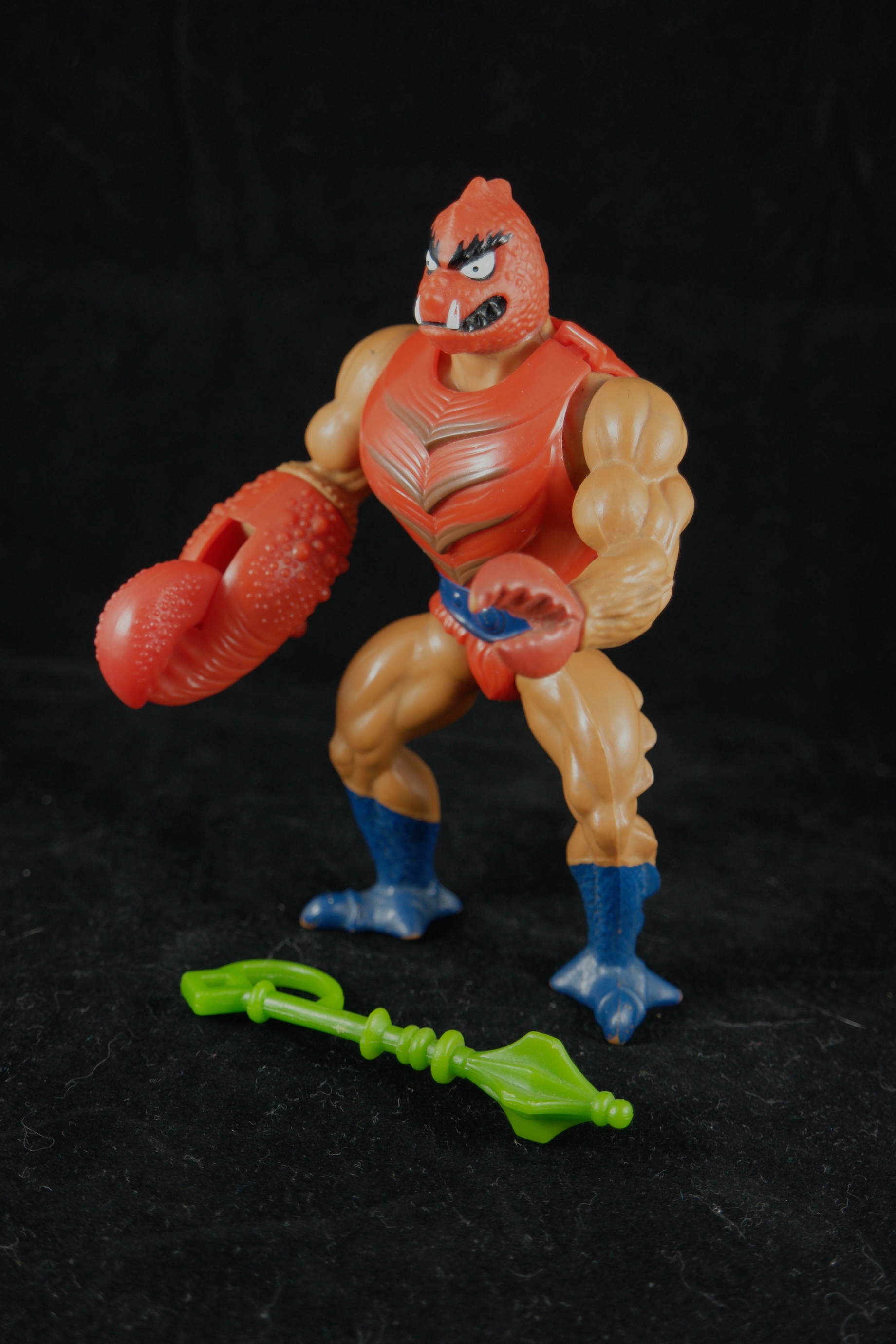 MATTEL, CLAWFUL is a character from the popular 1980s toy line and cartoon series He-Man and the Masters of the Universe.

Clawful is one of the members of the Evil Warriors, he appears to be a hybrid between a man and a crab or lobster, equipped with large, sharp claws that can crush the life out of his opponents. In most appearances his right claw is exceptionally larger and thus achieves an extra-deadly grip.

Clawful was introduced into the Masters of the Universe toy line in 1984. But however made his debut on the accompanying cartoon series by Filmation in 1983, late into the TV show's first season. This highly collectible figurine is in very good vintage condition, loose and 100% complete with weapon, and is a great entry level to start collecting.

MATTEL, RAM-MAN is a character from the popular 1980s toy line and cartoon series He-Man and the Masters of the Universe.

Ram-Man is one of the members of the Heroic Warriors, he's first appears was in the early Mattel mini-comic "He-Man Meets Ram-Man". In the comic be is portrayed as a loner who lives on a stretch of barren land and will attack anyone who crosses his land, which believing their intention is to fight him, and although his past is not delved into it is implied he had retreated to this stretch of land after being continuously victimized by others. After fighting He-Man from crossing his land and quickly been defeated, Ram-Man swears to get revenge. Skeletor takes advantage of this tricking Ram-Man, but fortunately realizing he had been tricked when He-Man came to his aid. Ram-Man befriended He-Man and joins the Heroic Warriors.

Ram-Man was introduced into the Masters of the Universe second wave of the toy line in 1983. But in the cartoon series by Filmation in 1983, he was depicted as a small, dwarfish figure, which is actually more closer in appearance to his action figure. Ram Man's aggressiveness was toned down for the TV show and is portrayed as a comical character, slow and dim-witted and almost child-like mentality, but strong-hearted and easily likeable. He often appears in the first season but had flesh out his character more in later episodes and continued to appear regularly through out of the cartoon series. This highly collectible figurine is in good vintage condition, loose and 100% complete with weapon, and is a great entry level to start collecting.

Well that wraps it up and I hope you enjoyed my blog. To ensure you get the latest news, products and blogs, please sign up on our sign up pop-up to our newsletter and receive 10% off your first purchase and don't forget if you have any questions you can contact us on our website or leave some feedback, we would love to hear from you.